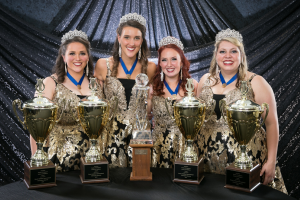 ClassRing Quartet consists of four young women who came together in the Spring of 2014 to compete in the Sweet Adelines International Rising Star Contest. After only a few months of rehearsal, they won the contest and were named the 2014 International Rising Star Champions! The quartet has since gone on to compete in the Sweet Adelines International contest, placing in the top 10 each year. ClassRing is your new 2019 Sweet Adelines International Quartet Champions!ClassRing has performed all over the United States including NYC at Carnegie Hall!  In addition to their performances around the country, they have also had the honor of teaching several youth workshops and camps. They love every opportunity to share their music and give back to the youth and the barbershop community! Members include: Mary Duncan, baritone, Kansas City, KS; Heather Havens, lead, Alide, VA; Hailey Parks, bass, Knoxville, TN; and Michaela Slamka- Johnston, tenor, Fort Myers, FL.